Attention dog lovers, horse lovers, jazz lovers, opera lovers, romance lovers, Batman lovers and David Byrne lovers (me!). Have we got a line-up of entertainment for you this week. 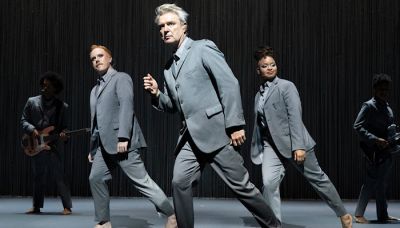 Clifton Collins (CAPOTE, TRAFFIC, STAR TREK) finally gets the leading role he so richly deserves. In JOCKEY he plays an aging rider hoping to win one last title on a championship horse. But the years - and injuries - have taken a toll on his body, throwing into question his ability to continue his lifelong passion. "What elevates [Jockey] is Collins, a familiar supporting actor with an air of Johnny cash whose nuanced, soulful work as star makes the whole movie ring true." -Financial Times

Lulu, a Belgian Malinois dog gets top billing in DOG. But I'm guessing that Channing Tatum - Lulu's costar - is perfectly fine with that. This buddy comedy about former Army Rangers on a road trip pulls all the familiar strings, but that's part of the fun of this unabashedly sentimental movie. "At heart, this is a film that wants some good pats, and it's willing to do whatever it takes to get them." -IndieWire

If you're a David Byrne fan, or open to becoming one, there is no better place to start than with AMERICAN UTOPIA, Spike Lee's beautiful and soulful film of Byrne's hit Broadway show. It's an outstanding collaboration between two essential artists, "a cathartic celebration, exactly when we need it." (Hollywood Reporter). "Bolstered by Lee's trenchant, intimate direction, Byrne reframes a peerless set list of songs to a testament to hope and humanity that implores himself and his audience to keep going." -Empire Magazine. Our one showing - this Saturday in the Rose at 7:45 - is almost sold out.

Film scholar and frequent Starlight Room lecturer Ted Walch returns to the Starlight April 2nd and 3rd with a three-film program entitled Movies and Journalism: From Yellow to Red. Ted will introduce each film and lead a post-film discussion after each one; CITIZEN KANE (4/2, 12:00), ALL THE PRESIDENT'S MEN (4/2, 3:30), REDS (4/3, 11:00). Tickets are now on sale: $12 each or $32 for the three-film series.

March is Women's History Month and the theme this year is Providing Healing, Promoting Hope. From out streaming Film Library we recommend the following movies about remarkable, inspiring women: BARBARA LEE: SPEAKING TRUTH TO POWER, BEYOND THE VISIBLE - HILMA AF KLINT, BOMBSHELL: THE HEDY LAMARR STORY, THE EAGLE HUNTRESS, EVA HESSE, THE GLEANERS AND I, IRIS, LOUISE BOURGEOIS: THE SPIDER, THE MISTRESS AND THE TANGERINE, MAIDEN, MAIDENTRIP, WOMAN AT WAR

The Banshees of Inisherin
7:00

The Metropolitan Opera Live: The Hours
9:55am

National Theatre Live: Much Ado About Nothing
12:00

Tickets are going fast for our member-only, free showing this Sunday (12/4) of the Barbara Stanwyck, Gary Cooper screwball comedy BALL OF FIRE. Written by Billy Wilder and Charles Brackett, and directed by Howard Hawks, this madcap comedy from 1941 is loosely based on Disney's SNOW WHITE AND THE SEVEN DWARFS. The movie also features Gene Kruppa and his orchestra. Tickets available both online and at the box office.
Read More »