Eighteen years ago we opened on the Rosebud screen a little-known French documentary called WINGED MIGRATION. We played it for over a month, and it went on to become one of the most successful movies that we've ever shown. Port Townsend was going bird crazy over this astonishing film that captures the immense journeys routinely made by birds during their migrations. And two years later we all flocked to see MARCH OF THE PENGUINS. 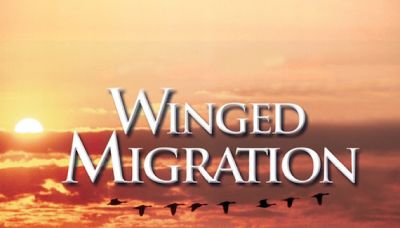 In recognition of Earth Day - Thursday, 4/22 - we're offering a FREE streaming of WINGED MIGRATION to 150 people. The Buy Tickets button will become active on Thursday at 12:00 AM. To reserve your ticket just click the button and you can watch the movie anytime that day. Unlike most of our streaming films, you will not have 72 hours in which to watch it. The link will become inactive at midnight Thursday. "For some 90 minutes, unadorned reality out-dazzles special effects, and poetry-prone viewers may find themselves remembering paeans to nature by Gerald Manley Hopkings." -Entertainment Weekly. "To be next to these birds as they are flying is frankly mesmerizing." -Los Angeles Times

WINGED MIGRATION, not surprisingly, is distributed by Sony Pictures Classics, one of the finest movie distributors. Their films have contributed greatly to making the Rose what it is today. So I'm pleased to announce that beginning this Friday, 4/23, and continuing into next week, we will be adding 22 great films from the Sony Pictures Classics collection. The titles include BAD EDUCATION (Pedro Almodovar), THE BAND'S VISIT, BEING JULIA (Annette Bening, Jeremy Irons), CITY OF LOST CHILDREN, CROUCHING TIGER, HIDDEN DRAGON (Best Foreign Language Film), DOGTOWN AND Z-BOYS, THE EAGLE HUNTRESS (NYT and LA Times Critics Pick), EVERY LITTLE STEP, THE ILLUSIONIST, THE LIVES OF OTHERS (Best Foreign Language Film), ORLANDO (Tilda Swinton), OUR LITTLE SISTER, PERSEPOLIS (Cannes Film Festival Jury Prize), PUZZLE, THE RIDER (From Chloé Zhao, director of NOMADLAND), RUN LOLA RUN, RACHEL GETTING MARRIED (Debra Winger, Anne Hathaway), RIDING GIANTS, SAINT LAURENT, SEARCHING FOR SUGAR MAN (Best Documentary Feature), THE TRIPLETS OF BELLVILLE (Best Animated Feature Nominee), and WELCOME TO THE DOLLHOUSE.

Also beginning this Friday - from the equally wonderful Icarus Films - comes DOWNSTREAM TO KINSHASA, the first Congolese film ever submitted for Academy Award consideration as Best Foreign Language Film. After almost twenty years of waiting for Uganda to pay one billion U.S. dollars to the victims of violence between Ugandan and Rwandan armies, citizens now decide to take matters into their own hands by venturing down the Congo river to Kinshasa, seeking justice at last. "A documentary about Sisyphean persistence in the face of institutional indifference, 'Downstream to Kinshasa' is riveting." -The New York Times