Actress Jenny Slate - the voice of MARCEL THE SHELL - and Dean Fleischer-Camp - the director - were at a bit of a career crossroads when they manifested Marcel, the one-inch tall seashell with a tiny voice and a big heart. 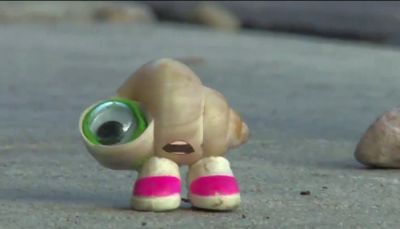 It was at this time of uncertainty that they found themselves at a wedding, sharing a hotel room with five other people to save money. Slate started speaking in a little, funny voice. Forty-eight hours later MARCEL THE SHELL WITH SHOES ON was born. That first Marcel video on YouTube went viral and Hollywood came knocking.

In the 12 years since that first moment of inspiration, Slate and Fleischer-Camp came to realize that what they wanted out of a Marcel feature film and what Hollywood wanted were two different things. They walked away from Hollywood to make the movie their way. And it's delightful. "How can a film so disarmingly simple inspire deep feelings about loss, connection, and the meaning of family? I'm not sure I have the answer, but at a time when so many of us are feeling disoriented - or disconnected - a movie like this is especially welcome." -Leonard Maltin. "It is so sweet, gentle, and wise. It's just pure joy." -NPR Los Angeles

Dessert anyone? Be sure to read below about an exciting upcoming food and film event with OTTOLENGHI AND THE CAKES OF VERSAILLES.

Reviews for Jodie Comer's performance in PRIMA FACIE are glowing: "West End debuts don't come much more astonishing than this." -Daily Telegraph. "Jodie Comer takes the stage by storm." -The Times. This Sunday, 8/31 is your last opportunity to catch this great show from the National Theatre.

The Rose, Rosebud and Starlight are all air conditioned. Although if you came to the CRAWDADS sneak preview two weeks ago, it was unusually warm because the system had not been programmed properly. My apologies.

In the summer of 2019 in the Starlight Room we staged an incredibly delicious movie and meal event around CITY OF GOLD, the wonderful cinematic profile of Los Angeles Times food critic Jonathan Gold. This summer we aim to equal – if not surpass – that cinematic culinary event. Laura Gabbert, the director of CITY OF GOLD went on to make OTTOLENGHI AND THE CAKES OF VERSAILLES.

Four years ago, New York’s Metropolitan Museum of Art enlisted Yotam Ottolenghi, the Israeli chef and celebrated cookbook author to organize a food gala inspired by the Met exhibit 'Visitors to Versailles.' And Laura Gabbert was there to record every tasty moment.

On Sunday, August 21st at 1:00 in the Starlight, we're presenting OTTOLENGHI AND THE CAKES OF VERSAILLES

Tickets are only available to Rose members.
Not a member yet? Click here to join.

Admission ($45) includes a glass of prosecco and the following desserts for each person, meticulously prepared by local baker Hanni Witzig, from Ottolenghi's cookbook!

Tickets go on sale for **Rose members only** on Wednesday, 8/3 at 3:30 at the box office and at rosetheatre.com. This event will sell out in a flash, so mark your calendars. No tickets will be sold after August 10.