I'll start with the big news - popcorn - because it leads to an even bigger news - the re-opening of the Rose Theatre and the Starlight Room. 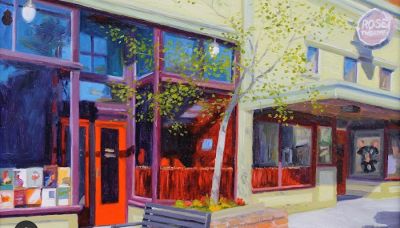 This Saturday, May 22nd will be our last pop-up, sidewalk popcorn sale so that we can direct all of our energy toward re-opening the theatres, hopefully in July. There is an enormous amount of work to be done, staff to hire, and protocols to be put in place for your safety and the safety of our staff. We'll detail these safety measures as the date gets closer.

We never would have survived this fifteen-month closure without your support. Never. To those of you who donated or loaned money, purchased gift cards, memberships, t-shirts, sweatshirts, streamed our films and bought popcorn week after week, thank you, thank you, thank you. We are so excited to welcome you back to the theatres.

Of the many things that I appreciate about SPRING BLOSSOM - streaming Friday, 5/21 - is that its point of view is from the woman's perspective. This light French romance feels fresh because of that. Suzanne Lindon began writing the screenplay when she was 15. She went on to direct this debut feature at age 20, and she stars in it as well, as a woman named Suzanne. "At 16, we sometimes fall in love with an idea more than a person. And I really wanted to talk about the fact that [these characters] find each other, and fall in love because they are no longer bored when they are together. I think I wrote what I wanted to live in my real life at that time." "Lindon creates a portrait of first love that is fresh, honest and engaging." -Screen Daily. "Provocative and original." -Hollywood Reporter

Caroline Link won the Academy Award in 2003 for directing a perennial favorite of mine - NOWHERE IN AFRICA. The autobiographical novel tells the story of a German-Jewish family escaping Nazi Germany. Link returns to familiar territory with her new film WHEN HITLER STOLE PINK RABBIT, streaming Friday, 5/21. Based on acclaimed British author Judith Kerr's autobiographical novel, the story recounts her family's escape from Berlin in 1933. The young actress Riva Krymalowski, in a great performance, plays her nine-year-old alter ego Anna Kemper. "In tone and approach, 'When Hitler Stole Pink Rabbit' recalls 'To Kill a Mockingbird.'"

I'm very pleased to be adding to our Film Library this Friday, 5/21 another favorite documentary of mine - FOREVER by director Heddy Honigmann. It is set almost entirely in Pére-Lachaise cemetery in Paris, the final resting place for legendary writers, composers, painters and other artists from around the world. "How can a film about a graveyard contain so much life? It is ultimately a meditation on the human condition and how, in the midst of grief and loss, we manage to create fragile, piercing joys." -Time Out New York

Dove House Advocacy Services of Jefferson County is sponsoring a free streaming through the Rose Theatre Film Library of SISTERS RISING from Monday, May 24th through Monday, May 31st. The film is a powerful documentary about six Native American women reclaiming personal and tribal sovereignty in the face of ongoing sexual and colonial violence. Dove House provides services for those in recovery from domestic violence, homelessness, sexual assault, mental illness, addiction, general crimes, and other sources of trauma.

The Banshees of Inisherin
7:00

The Metropolitan Opera Live: The Hours
9:55am

National Theatre Live: Much Ado About Nothing
12:00

Tickets are going fast for our member-only, free showing this Sunday (12/4) of the Barbara Stanwyck, Gary Cooper screwball comedy BALL OF FIRE. Written by Billy Wilder and Charles Brackett, and directed by Howard Hawks, this madcap comedy from 1941 is loosely based on Disney's SNOW WHITE AND THE SEVEN DWARFS. The movie also features Gene Kruppa and his orchestra. Tickets available both online and at the box office.
Read More »