“Much like many filmmakers do with cities in fictional narrative form, NEW BAUHAUS director Alysa Nahmias allows Chicago to become a living, breathing entity that pulsates with Moholy-Nagy’s romantic outlook on the world in documentary form. By the end of the movie, you won’t just admire Moholy-Nagy—you’ll want to be just like him.”
— Forbes 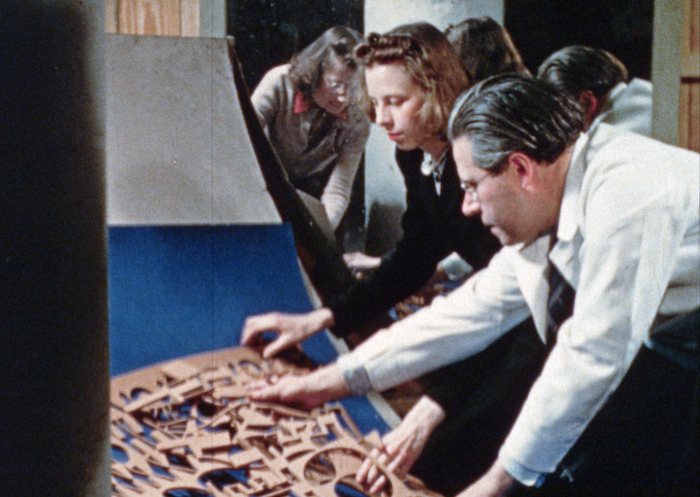 In the 1920s, rising artist László Moholy-Nagy taught at the revolutionary Bauhaus school in Weimar, Germany, alongside luminaries like Paul Klee, Josef Albers, Anni Albers, Gunta Stolzl, Wassily Kandinsky, and Marcel Breuer. An upstart within this esteemed group, Moholy established himself as a visionary, and his approach to teaching became the ethos of his work: training artists to live “happier lives in modernity.”

Forced into exile by the Nazis, Moholy moved to Chicago, where he found himself inspired by the sense of re-invention in the city. Initially at the New Bauhaus and ultimately through the Institute of Design, Moholy challenged students to create systemic, human-centered design. Motivated by the challenge of creating within the limitations of the Great Depression and then World War II, Moholy’s embrace of artistic versatility and technological possibility continues to reverberate in the artworld today. Objects that are now ubiquitous in our culture, such as the Dove soap bar, the Honey Bear, and the cover of the first issue of Playboy magazine were designed by students and alumni of The New Bauhaus. Graduates of the Institute of Design became renowned fine art photographers and pioneers of digital design in the internet’s early days.

Moholy’s own output as an artist remained “relentlessly experimental,” with pioneering work created in a range of media including painting, photography, typography, collage, sculpture, and film. His central lessons as a teacher were reflected in his own work: the thought behind creation was as important as the work itself. Unfortunately, his creative production was cut short by his untimely death at age 51 from leukemia—but his legacy lives on in his students who now teach his approach themselves, providing inspiration to anyone using art to make sense of the world. NR, 89 min.

“A team of filmmakers channeled their passion for architecture, art, and design into the production of an in-depth examination of Maholy’s art and vision for the future of design. The film, titled THE NEW BAUHAUS, utilizes specialized access to archives at the Moholy-Nagy Foundation and Maholy’s surviving daughter Hattula.” — Arch Daily

“Today, when newcomers to America are often regarded as suspect, Petter Ringbom and Marquise Stillwell of Opendox, the film’s production company, seek to highlight Moholy-Nagy‘s contributions as an immigrant. He never gained the recognition of Bauhaus leaders like Ludwig Mies van der Rohe, but Moholy-Nagy kept alive ‘the idea of unifying different disciplines.'” — New York Times

“You’ll never look at a bar of Dove soap the same way after watching this.” – RogerEbert.com

“Viewers can only hope but aspire to the creed by which Moholy-Nagy lived his life.” – 812 Film Reviews

Rose members receive amazing discounts at the Rose and Starlight Room, in addition to some of Jefferson County's finest businesses including the Finnriver Cidery, Elevated Ice Cream, the Pourhouse, and more!
Learn more »

When I first saw RBG in 2018, I knew that Port Townsend would embrace the film, that Ruth Bader Ginsberg's story would find it way into peoples' hearts. It was a fait accompli. Her life's work in the name of equality and justice earned her legions of admirers. We're bringing the film back (streaming) beginning this Friday, and 100% of the Rose's proceeds will be donated to the ACLU Women's Rights Project, which Ginsberg co-founded in 1972. The streaming this time is not a rental, but an actual purchase of the film ($6.99) that you will own. "Fight for the things you care about, but do it in a way that will lead others to join you." -Ruth Bader Ginsberg.
Read More »

With a weekly selection of films, and a sumptuous menu devised by the Silverwater upstairs kitchen, it's the perfect night out. Come see the stars among the stars.

New to the menu are made-to-order paninis and pizzas, with home-made dough. (Gluten free dough available).